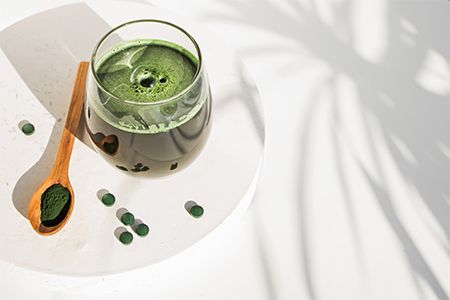 We called Chlorella as "Natural Multi-Vitamin" because it provides full range of health advantages. Chlorella is enriched with chlorophyll as well as countless other nutrients, meaning it can provide health benefits in different ways. It can supports the immune system, detoxifies the body, fight obesity, speed up fat loss and increase the metabolism. Also, dietary fiber can support bowel movement and maintain healthy internal body cleansing.

What Can Be Done To Prevent Radiation And Toxins?

Since the radioactive contaminations of food products from the nuclear incident in Japan, there have been endless reports on food safety. Followed by the more recent E.coli infected German vegetables, consumers are starting to fear and wonder about which foods are really safe.

In fact, food has long been ubiquitous polluted. It was not long ago when we discovered that Chinese milk manufacturers manufactured milk that contained large amounts of melamine, a dangerous plastic. This was done to reduce material costs for the manufacturers. Apart from the man-made pollutants, there are also natural disasters and environmental pollutions that may create unsafe food products.

What is vitally important now is to learn from the recent food contamination issues and look into how one can prevent these pollutants and toxins from entering the human body, and also what can be done to remove the toxins that have already accumulated inside the body. Think of food issues as a turning point for healthy diets, it will be the key of success to healthy living.

Research shows Chlorella's effect to detox, and Spirulina's effect to immune, 40 Years ago, scientists have already discovered that chlorella contains the secret to detoxification. Since 2000, Morita K and many other scholars have been conducting animal studies and found that diets that contain chlorella or chlorophyll, can not only reduce dioxin and heavy metal from getting absorbed from the intestines, it can also effectively speed up the discharge of toxic substances.

In 1993, at the International Conference on Applied Phycology, some scholars published researches that claimed Spirulina's positive effects against radiation. Their research found that Spirulina is a natural absorbent of radiation, which can help reduce the amount of radiation accumulated, and even have the ability to recover children who have been exposed to low doses of radiation for a long period of time.

On 30th June 2011, an organization that protected the Fukushima residents published an analysis, which showed the detected level of radiation in children's urine. Ten children from the range of 6~16 years old were detected with cesium in their urine, proving that the local children have been contaminated with radioactive material. This also shows that the radiation issue is not yet over in Japan, and it is estimated for the next 10 years or so will still be affected by the radioactive material. Therefore, this is an appropriate time to take FEBICO's Organic Spirulina to prevent radioactive contamination.

Living in such a highly industrialized environment today, it is not easy getting rid of all the threats from environmental toxins. People should take this opportunity to re-establish good personal habits, more rests, less alcohol, and more exercise will enable the liver to restore its original functions. With the help of FEBICO's Organic Spirulina and Organic Chlorella, users will be able to reduce and prevent toxic contaminations and achieve a healthy lifestyle!

Photosensitization by Chlorella? Watch out!

FEBICO had started to promote the benefits of chlorella and spirulina since 1976, during the prime time when there were more than 300 microalgae manufacturers in Taiwan, and the demand for chlorella was at its highest peak. However in 1978, numerous incidents of photosensitization by taking chlorella had occurred in Japan. People who had taken too much chlorella reported cases of erythema (superficial reddening of the skin caused by dilation of blood capillaries) on the areas exposed to sunlight, which led to local itchiness and ulcer.

Scientists have later found that during the process of improper chlorella manufacturing, a phototoxic substance called pheophorbides, have created and cause damage to the body with the stimulation of sun light. In Europe, similar accidents have occurred among livestock due to over consumption of pheophorbides-contained vegetables and expressed dermatitis on the skin or in some severe cases, death.

Vegetables during storage, manufacture process, or cooking, might convert the chlorophyll structure to pheophorbides, changing the natural green color of leaf to brown. Many consumers were worried about getting sun rashes and stopped taking chlorella 30 years ago. Many factories in Taiwan were forced to shut down due to this unfortunate accident. Fortunately, FEBICOhas been following its stringent quality control and in-house manufacturing process. There has been no accidents of photosensitization reported from our consumers and the companies we had worked with. Department of Health of Taiwan regulates the amount of total pheophobides to be under 100mg% for spirulina strain and under 80 mg% for chlorella strain. This standard was well established in Taiwan and Japan more than 20 years ago, indicating that Taiwan and Japan have been taken chlorella and spirulina to be healthy for a long period of time. With the emerging supplement markets of chlorella and spirulina, there are several chlorella products currently available on market that has pheophorbides levels 700%~1000% higher than the food safety level. It can very much cause the same photosensitization issue as 30 years ago and should be a precaution to everyone.

Up until now, FEBICO's chlorella and spirulina are made under HACCP manufacturing process with ISO22000 standard. FEBICO's commitment to preserve what's best in the chlorella and spirulina since 1970s without unnecessary food processing by human or environmental hormones such as heavy metal, chemical waste, or radiation pollution are closely examined by the Tse-Xin Organic Agriculture Foundation(Taiwan), Naturland (Germany), and NOP (USDA) annually to certify its 100% organic and naturalness.

Are You A Pilot? Learn How Chlorella & Spirulina Can Help Your Health

Flying is wonderful and safe, that is if you are a passenger. However, pilots and cabin crew are subject to many health risks related to the air travel. Cosmic radiation, ozone, an arid atmosphere, high levels of ambient noise, and communicable diseases, just to name a few.

Radiation on an Airplane
If you are a passenger and you fly only a few times per year you have nothing to worry about, the time you spend in the cabin is too short to put you at risk. If you are a pilot or a cabin crew member, you might spend up to 1,000 hours in flight during any calendar year. That's a lot of time. During that time pilots and crew members are exposed to some environmental hazards, one of which is cosmic radiation; exposure is increased at higher altitudes and latitudes, as in transpolar intercontinental flights. It's true that there are federal limits to radiation and ozone in the US, and similar restrictions were set Europe, but in reality, no one is monitoring exposure to radiation and ozone on an airplane.

Who should take spirulina for radiation protection?
Spirulina is beneficial not only to people exposed to high levels of radiation. Frequent flyers, airline pilots (including aircrew), military personnel, and even miners are exposed to dangerous radiation. If you enjoy sunbathing, have frequent x-rays or just want to healthier, it might be a good idea to add chlorella and spirulina to your daily diet.

But radiation is not the only problem professional pilots are facing.
Research shows that pilots and cabin crew members are always fighting with:
• fatigue
• constipation
• contagious disease
• heat and humidity of the work
• environmental hazards
• contaminations
• ozone
• contamination of cockpit oxygen
• ambient flight deck noise

Not all of above problems can be fixed with natural remedies, but spirulina and chlorella can help fight you with some of them.

Constipation: Thanks to high fiber content Chlorella is a great remedy for constipation. Also, chlorella has natural digestive enzymes. Those enzymes cause the healthy lactic bacteria in the gut to grow 4 times as fast as normal, improving your digestion and bringing relief.

Fatigue: Chlorella can also help you deal with chronic fatigue. It's rich in nucleic acids and has very high levels of vitamin A (beta-carotene). Also, it's a rich source of vitamin C and iron. Because of that it's an effective remedy for anemia or malnutrition. It enriches and cleanses the blood as well as improves the work of the nervous system and brain.

Environmental Hazards: Air on the airplane is contaminated, so pilots and crew members are always at risk of getting an infectious disease.

Chlorella is a well-know detoxifier. It "works" jointly with the immune system and removes toxins from the body and promotes cell renewal. This improves the body's ability to defend against contaminations such as smog, pesticides and harmful elements present in the air cabin. Algae can also be used to combat free radicals.

Finally, dry cabin air together with fatigue can ruin your skin, chlorella can help you keep your skin in shape even after long and tiring flight. 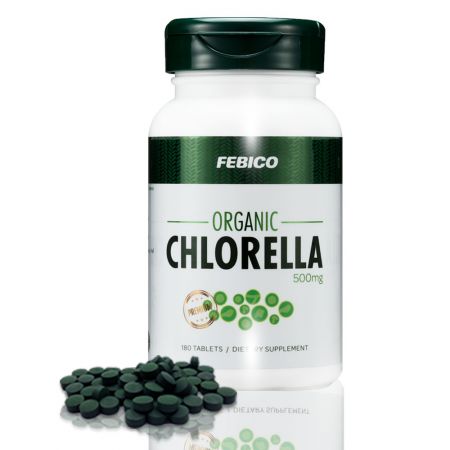 Organic Chlorella is a blue-green algae contains many precious nutrients more than 20 vitamins and minerals including complex B, beta-carotene, Vitamin... 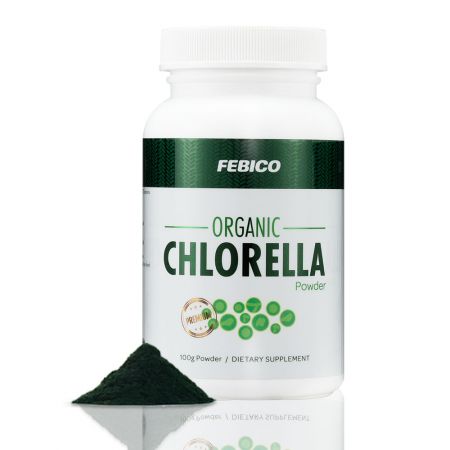 Febico is a professional microalgae manufacturer in Taiwan, we offer organic wholesaler and private label service for Organic Chlorella powder. You may contact... 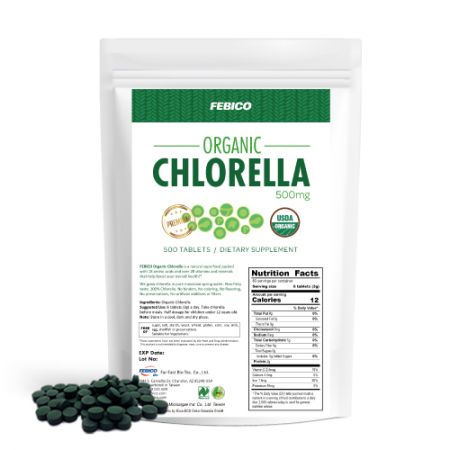 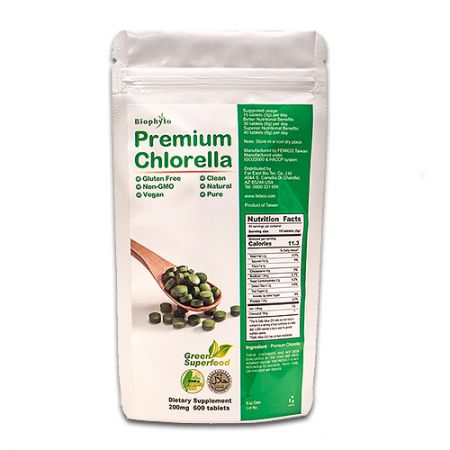 Febico is microalgae manufacturer and Supplier in Taiwan, our superfoods Chlorella is cultivated by clean spring mountain water with no heavy metal pollutant... 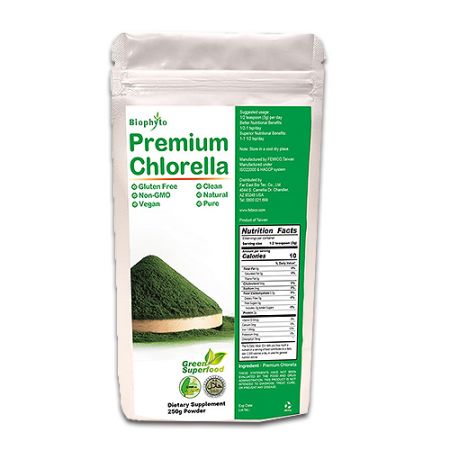 Biophyto Premium Chlorella powder enhance metabolism and help bowel movement. It is packed with 18 amino acids, and over 20 vitamins and minerals that...