The COVID-19 epidemic continues to ravage the world, with a total of more than 62.6 million people infected worldwide so far, and the number of infected people in Europe and the United States is increasing with more than 600,000 confirmed cases every day. Far East Bio-Tec. Co. Ltd. (FEBICO), which has been engaged in the development of antiviral drugs for more than 20 years, in collaboration with the Research Center for Emerging Viral Infections (RCEVI) of Chang Gung University. RCEVI is now part of the “Research Center for Epidemic Prevention Science of the Ministry of Science and Technology'' that belongs to the national COVID-19 prevention team, discovered that the main drug ingredient FB-1603 (formerly known as Apogen®) in the influenza drug target Apomivir® (human clinical trials approved in Taiwan and the United States) significantly inhibits the activity of the new coronavirus in cellular experiments. 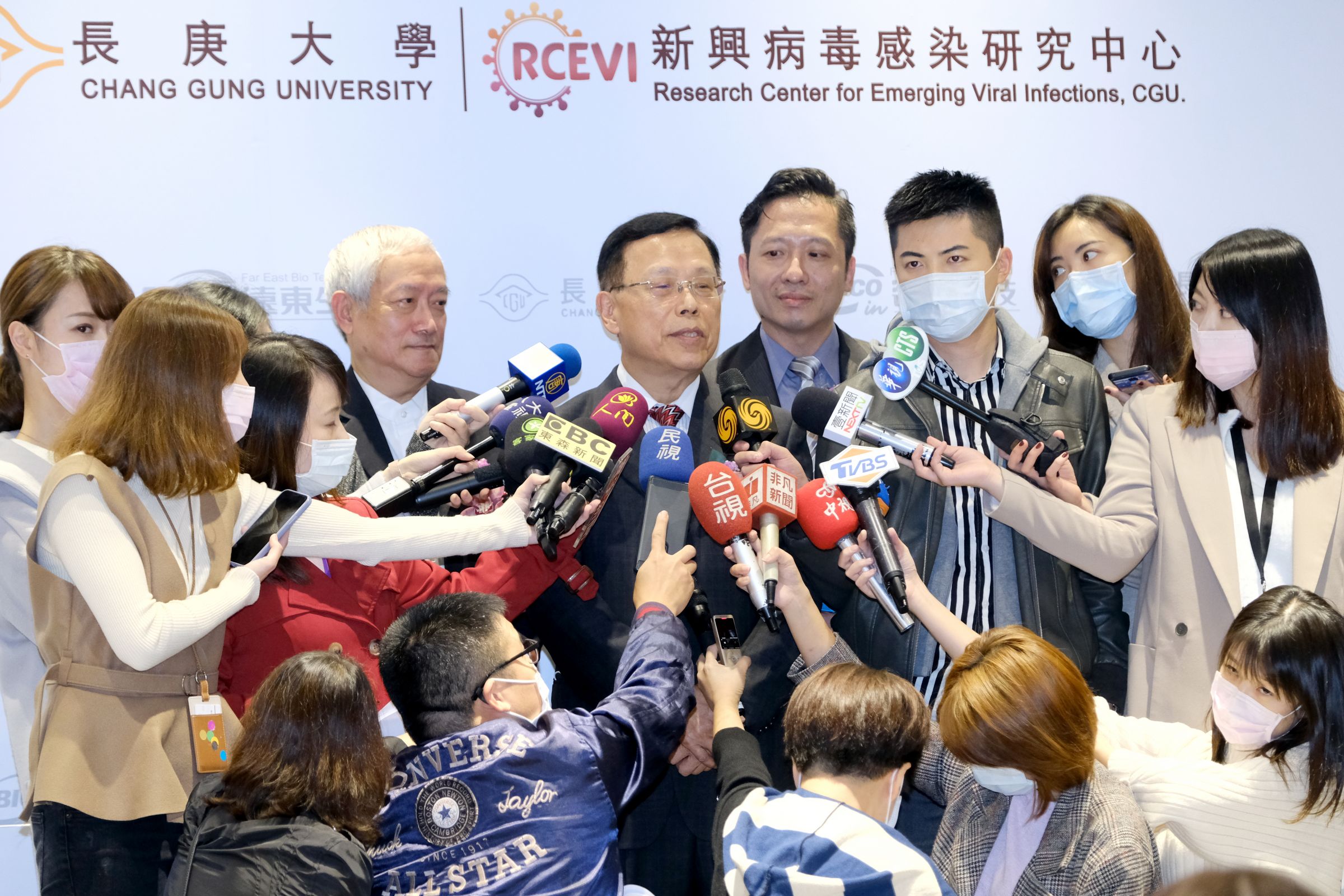 How does FB-1603 inhibit the activity of COVID-19 in cellular experiments? President FEBICO, C. C. Chiuh, pointed out: "Let’s use the keyhole as a metaphor. The virus needs to open the main entrance of healthy host cells and enter the room to reproduce. However, the mechanism of FB-1603 can directly plug the keyhole of the main entrance of normal cells. Therefore, the virus cannot open the main entrance of normal cells and enter. Therefore, in cellular experiments, we discovered that FB-1603 has the potential to prevent COVID-19 and can put on masks for cells! In the development timeline, FEBICO has filed a patent application for Apomivir® on COVID-19 inhibition. In August this year, it also submitted the application to the US FDA for the pre-IND on human clinical trials for "treatment of COVID-19" (pre-IND number: 151566). The Phase II human clinical trial application is expected to be submitted to the US FDA in the first quarter of 2021. 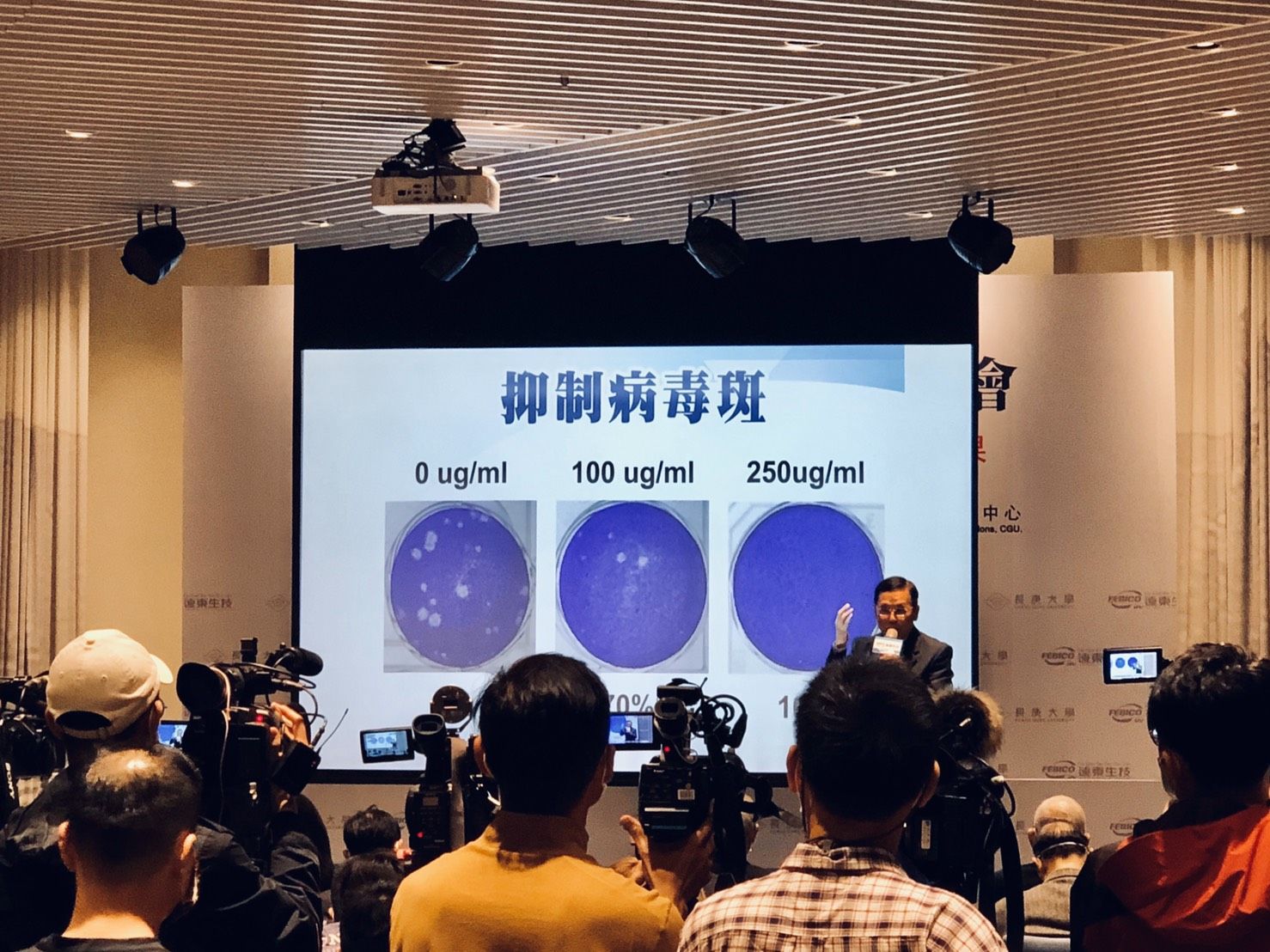 In addition, FB-1603, which is the pioneered "broad-spectrum antiviral technology" in Taiwan, also has the ability to inhibit the activity of a variety of viruses, including enterovirus, influenza virus type A/ type B, Ebola virus, and even herpes zoster virus--commonly known as "shingles" as well as herpes simplex virus (HSV-1 and HSV-2). FEBICO has also been in continuous cooperation with the National Institutes of Health (NIH/NIAID) of the United States (Note 1).

As for the relationship between future vaccines and new drugs, Professor Shin-Ru Shih, director of the Research Center for Emerging Viral Infections of Chang Gung University, stated that: "Chang Gung University has been continuing industry-academia cooperation with FEBICO for 22 years. From with the enterovirus outbreak in 1998 and then the coronavirus pandemic this year, RCEVI has confirmed through cell experiments that FB-1603 can effectively inhibit the 229E coronavirus as well as the new coronavirus (SARS-CoV2). The initial mechanism is that the spike protein in FB-1603 binds to the cell surface receptor (ACE2), but the exact mechanism still needs to be further clarified. Although the vaccines are about to become available in the market, we have not yet understood the mutation rate of the virus after the vaccine is administered, and how long the antibody can last in the human body. Therefore, in addition to vaccines, the development of antiviral drugs with different mechanisms and new drug technologies that can inhibit a variety of viruses is fairly crucial to the global epidemic prevention in the future. This is also one of the original intentions for the establishment of the RCEVI of Chang Gung University (Note 2)." 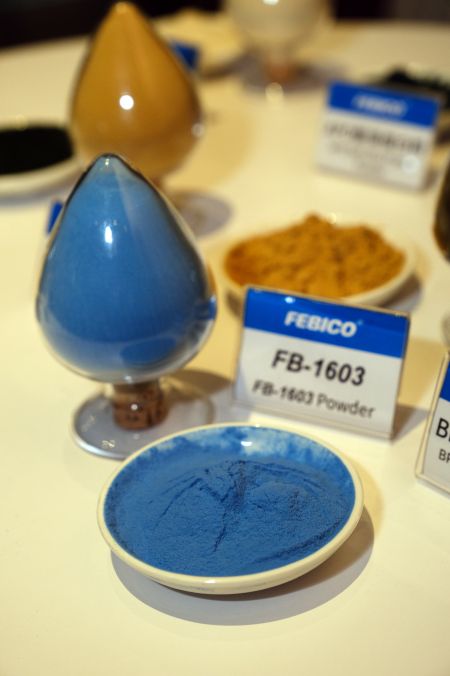 ago to develop the pioneered broad-spectrum antiviral technology in Taiwan

Dr. Yi-Hsiang Chen, vice president of the R&D Department in FEBICO, analyzed that: "There is a single active ingredient in FB-1603 that is a macromolecular and reticular polysaccharide, which is extracted from FEM-101 special microalgae. FEM-101 is a archaea, which has been alive for over 3 billion years and has evolved the natural resistance to fight back against the attack of many viruses and bacteria. It can be regarded as a gift from the creator to mankind. In addition, as opposed to Remdesivir, which is a small molecule drug that once the virus gene mutates, it affects the efficacy of drugs, FB-1603 is a rare macromolecular drug in which the macromolecular reticular polysaccharide has sufficient stability, heat resistance as well as acid and alkali resistance, and therefore can be used in many applications through subsequent development. In addition to drug development, if it is made into an external spray, it will not lose its activity when sprayed in the air. It is highly safe, and there is no need to worry about being harmed if one accidentally eats it. As a result, FEBICO is very optimistic about the development of this new botanical new drug for new coronavirus (SARS-CoV2). At the same time, it is looking for suitable clinical partners to codevelop the drug and look forward to contributing to the global epidemic."

Note 1: Starting from 2015, FEBICO has cooperated with the National Institutes of Health (NIH/NIAID) to conduct tests in the highest-level P4 laboratory. The FB-1603 ingredient can also inhibit the activity of Ebola virus, of which the fatality rate is as high as 90%. Both parties will evaluate the possibility of conducting animal experiments.

Note 2: The vision for the establishment of the Research Center for Emerging Viral Infections of Chang Gung University: Emerging viruses pose an increasing threat to the entire world. Viruses such as SARS, avian flu, and H1N1 have severely endangered human lives, and have caused great impacts on social economy, transportation, ecology, and education. The Research Center expects to cooperate with experts in different fields to accomplish the following missions: (1) to identify emerging viral infections (2) to conduct cross-field research on emerging viruses (3) to build a bridge between basic science and clinical science (4) to develop antiviral drugs and immunotherapy (5) to promote the research of emerging viral infections through solid international cooperation.

FEBICO was established in 1976 as a biotechnology development company for algae applications. In order to develop new drugs, it is expected to enter the capital market in 2021, registered in initial public offering in April and to get listed on the emerging stock market in the second half of 2021. The business segments include functional health food, biomedical reagents and antiviral new drug development. In 2010, FEBICO was approved by the Ministry of Economic Affairs as a biotech and new pharmaceuticals company and had 19 patents. When the enterovirus became widespread in Taiwan in 1998, FEBICO began to study the application of microalgae in suppressing viruses and established a special algae FEM-101 antiviral technology platform through the antiviral research of microalgae for more than 20 years. FEBICO also cooperated with the Research Center for Emerging Viral Infections of Chang Gung University and various well-known research centers abroad, and discovered that Apomivir® extracted from FEM-101 algae is a broad-spectrum antiviral drug. In addition, ApoX®, a long-acting in vitro antiviral spray developed as years of industry-academic research and development results, also won the SNQ National Quality Mark Epidemic Prevention Certification in 2018 and the Bronze Award of the National Biotechnology and Medical Quality Award. 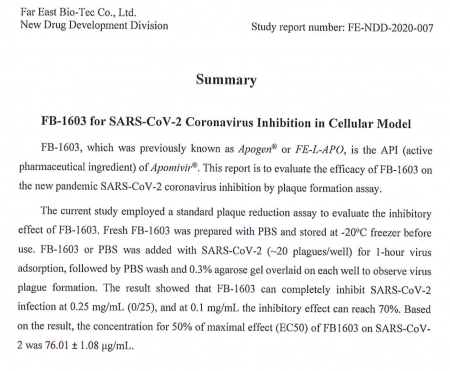 FB-1603 is extracted from a specially cultivated and selected ancient strain called FEM-101. The special protein and polysaccharide is obtained through a multinational patented process. The color of the powder itself is sky blue. High concentration of FB-1603 will appear the sea blue color while dissolved in water. It will appear special fluorescent pink after being irradiated with light, which represents the protein activity inside. FB-1603 has broad-spectrum virus-inhibiting properties and is currently registered in the Drug Master File of US FDA as an active pharmaceutical ingredient candidate. 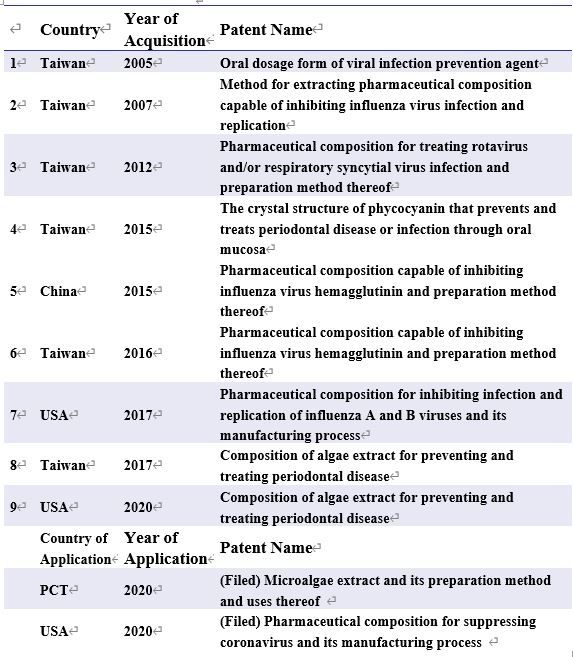 For detailed product information and inquiry please contact us.